Brenda was born in a National City, just south of San Diego, on April 3rd, 1962. She lived with her parents, brother and sister on Boulder Lake Ave.

A neighbor who lived nearby said Brenda was a “"spindly tomboy, who was no bigger than a bar of soap." in an LA Times interview. She said she would pick wildflowers, roots and present them to her mother as a bouquet.

She also said Brenda rode wheelies on her bike and slid down hills on cardboard. "I'd say to my son, don't let Brenda get hurt, and my son would say, 'Hurt? You can't hurt Brenda. Brenda's all right for a girl.'" Described best as “normal, normal, normal” by the neighbor.

During those years, Brenda was a Campfire Blue Bird, played golf with her mum and was part of the newly formed Bobby Sox softball league for girls in the area. The neighbor remembered her mother “forever hauling the kids around” from one thing to another. 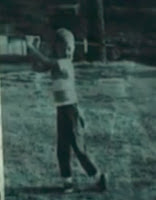 When Brenda was nine, she played in one of the county’s top-level junior golf tournaments. Dot and all the kids were more than proficient golfers according to the grandmother. Soccer was another of her favorite sports and her older brother, Scott went on to play for the High School team.

In 1971 the parents separated and her father moved out and eventually bought a 3 bedroom on Lake Atlin Ave. The divorce was finalized in January 1972. Brenda was only nine years old when she moved in with her father and siblings. According to her mom, this is what all the problems began...

Neighbors of the mother said Brenda would visit after school. She would climb the back fence and play with the dogs while waiting for her mum to get home. “I’d see her maybe once a week and then she’d come over and spend part of the weekend with me,” her mom said. Brenda would sometimes be waiting at the door when she came home from work.

Her grandmother said that Brenda would be tearful when it was time for her to leave and return to her dad’s house. The next door neighbour told the LA Times, "I can still see her now sitting out on the windowsill for hours so tiny and alone, looking out toward the school with her arm around the dog."

She remembered Brenda climbing trees and sitting in their tree house but that she was also quiet and appeared to be a lonely girl. They moved away in 1974 and told the new tenants that they "were going to have a wonderful little girl next door."

Brenda was a well-known little girl on the street and many different neighbors remembered her as a girl who would pop by to show them the new animals she had received or was taking care of.

The Spencer kids visited the fathers family in Arkansas during the summers. Brenda was taken hunting and taught how to handle a weapon from an early age. At 12 she had her own pellet gun and handled her Uncle’s larger rifles quite often. “We hunted all the time when I went to Arkansas with our family,” Brenda said.

She loved animals but was thought to have shot at birds in the back yard with her pellet rifle. She was once asked to stop by the people living behind her. Brenda was an was an avid reader and also began to write poetry. She had a number of books on the go at any given time and read any and everything.

Once she said she wanted to be a Veterinarian and gave books about animals to the neighbor kids. Brenda was told by her mum that her grades were not good enough to become a vet. Brenda responded, “Ugggh”.

Brenda was arrested and released for stealing ammunition from a drug store at 13. At 14 she had a bike accident that, according to many doctors, left her epileptic.

In 1976, her father purchased land near the Mexican border for them to practice their shooting. Brenda used her pellet rifle on cans and occasionally small animal targets. She became a a very good shot and the family bragged about to friends.

A year before the shooting she was arrested and released for vandalizing Cleveland Elementary school across the road.Then she was expelled from high school but returned the following semester after a year in an alternative school.

For Christmas, a month before the shooting, she was given a .22 Rifle by her father with an estimated 500 rounds of ammo. For safety, her brother gave her a trigger lock to make sure it did not go off accidentally.

Brenda was 16 years old when she used the rifle to shoot across the road...