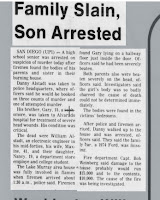 17-year-old Danny Alstadt was an Eagle Scout and high school senior at nearby Patrick Henry High School getting mostly As and Bs. The Alstadts lived on Lake Ben Avenue in San Carlos, just behind the Navajo Shopping Center and were popular in the area.

One day in February 1975, out of the blue, he decided to bump off his parents, brother, and sister, then set the house on fire before taking off in the family's 1974 Ford.

When fire crews rushed to the house in answer to alarm calls, they found the bodies of Danny Altstaft’s engineer father, William, and homemaker mother, Maxine, beaten to death in the burned wreckage. The body of Danny’s 19-year-old sister Nancy was so severely charred in her room that the cause of death was not known for some time.

Firefighters found younger brother Gary,15, in the house’s hallway just inside the front door. He was alive, but had severe wounds to his head, later determined to have been inflicted by an ax.

As firefighters extinguished the blaze, Daniel Altstadt strolled up to ask what was going on. He was promptly arrested on suspicion of the triple homicide of his parents and sister and attempted murder of his brother. Gary, who still lives in San Diego, has spent his life paralyzed in a wheelchair,

Danny hanged himself with a shoelace in his prison cell in 2000, while serving a life sentence for the triple murder. He was 43.

Brenda went to school with Gary Alstadt and her older brother, Scott, was good friends with Danny at the time of the murder. The Altstadt case was the biggest news story ever to have happened in peaceful San Carlos until that Monday four years later.