SWAT about to arrest Brenda

At 3:06 PM Brenda strolled out side and put her two weapons on the ground. She went back in and grabbed all the Ammo she could find and walked to the end of the driveway and dropped them. While still in a hunched position SWAT officers came from both sides and arrested her.

She did not run nor put up a fight. She was arrested while standing and quick walked across the road, through the school she riddled with bullets and out to an awaiting patrol car.
Officer Ted Kasinak walked behind the arresting SWAT officers and directed them to his unit. She was rapidly driven straight to SD Police HQ downtown on Market Street. The location was known as Dead Man's Point, named because of its use as a burial place for sailors and marines during the charting and surveying of San Diego Bay.

Brenda sat quietly in the back seat and never spoke a word nor was spoken to by Officer Kasinak or attending Officer Patty Berneathy. She booked in after dodging newspaper photographers and TV cameras in the hallway. Her father arrived soon after and both were interviewed by Detective Fred Dreis and Chet Thurston.

Hours earlier Officer Berneathy was pinned down in the school parking lot with her trainer and partner Officer Sam Cater. They were one of the first units to arrive and  had the task of trying to identify the location of the gun fire. The echoing  sound of bullets hitting the front of the school building  was all they had to go by. The small caliber .22 rifle only made a small popping noise and they were able to locate it between the trees across the road.
Officer Sharon Amos arrived from the west and made her way to the front of the school. She escorted dozens of kids to safety and was pinned down behind a tree. Officer's Robert Robb and Dennis Doremus arrived at the rear of the school in their police ambulance. They raced to the front of the school to look for the wounded and straight into the path of Brenda's bullets.
While applying a chest compression to the mortally wounded principal, Officer Robb was shot in his neck. He continued to lift the injured onto his gurney and took off back to his van. Half way there he became weak and was carried the rest of the way by his partner Doremus. He dropped his service weapon along the way and other officers began to look for it.
Officer Kasinak arrived from the east after being warned of the shooters position. With Officer Christensen he commandeered a large trash truck and drove it in front of the school entrance. The truck blocked Brenda view of the hiding students and teachers. It also allowed the wounded to be medically treated.

Remarkably, at the same time Kasinak was exiting the trash truck, Brenda received the first call from the Evening Tribune reporter Steve Wiegand. Brenda had a clear view of the condos on the next block up and a number of the attending media but never attempted to shoot.
Brenda never took another shot and was arrested over 5 hours later. The police and SWAT did not discharged a single weapon during the siege and Brenda was apprehended after a lengthy negotiation with SDPD detectives. 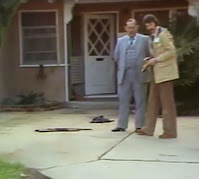 Before Brenda was seated in Officer Kasinak's police car, the detective teams were already placed to start clearing the site. Detectives and techs split duties between the school and the house. 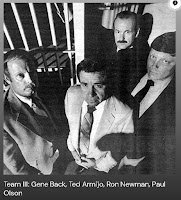 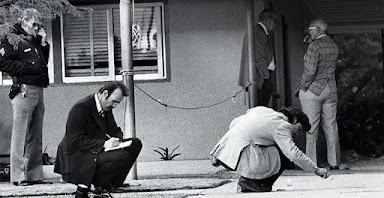 At the house across the road, Homicide Team II began their investigation with the driveway and entrance to the house. Lab tech. Brown immediately went to the two weapons in the middle of the drive. The Ruger .22 and pump pellet rifle were tagged and processed while the media captured it all with long-range lenses. 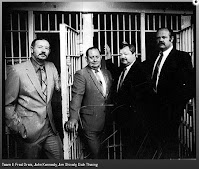 Sgt. John Kennedy was photographed standing in the doorway with his hands through the two broken windowpanes. In his light blue three-piece suit, Kennedy stood frowning behind the white door and broken glass. The San Diego Union ran the photo next morning.

Brown stood just long enough with both weapons in his hands to be photographed from a few angles. The pellet gun looked remarkably like a dangerous weapon although may not have been shot that day. It certainly would not have seriously hurt anyone across the street. Kennedy oversaw the area while Brown tagged and removed the rifles and ammunition at the end of the drive.

Lab Tech Brown was one of the first to enter the house and start processing the entrance way. His life took a very unfortunate turn for the worst after his retirement from the police in 2002. His DNA was found on a teenager’s dead body at Torrey Pines State Beach, after her 1984 murder.

After re-examining trace evidence in 2012 he was implicated as a suspect and interviewed. Unaware the victim was 14, he said he had relations with many people in the 80s and couldn’t be sure if he knew the her. He brushed it off as DNA contamination as he worked in the same lab it was tested.

Brown passed an independent polygraph test but took his own life 16 months later. His wife says, police hounded him for over a year, and he had a nervous breakdown. His suicide drew attention to other possible cold cases with contaminated evidence.

The house was documented as a single-family dwelling of light brown stucco with white wood trim and a dark brown garage door. Detectives Dick Thwing and Jim Shively oversaw the operation in the house and focused most of their attention on the entranceway. The detectives would photo document the entire house, but the crime scene was only the front entrance.

Det. Thwing joined the force ten years earlier and was promoted to detective. He was a big man known as the life of the party with huge laugh. Det. Shively was the longest running member of the homicide teams and prided himself on not getting emotional no matter how gruesome the evidence.

“We didn’t have extensive work to do,” Thwing said. “By the time I got there, she was already on the phone telling people what she did. You don’t have to be as careful with your investigation when you already had a confession.”

The SWAT team had been through the house to make sure it was clear of danger and left the front door wide open. Homicide Team II arrived just as the SWAT team had finished their sweep and were leaving.

A little after 8 a.m on Monday, Jan. 29, 1979, parents in San Carlos, a pleasant suburb of the California seaside city of San Diego, started the drive to drop their children off at school, as older students began walking there. Before the day was much older, this peaceful scene erupted into the site of ultimate horror -- a rapid-fire rifle attack on an elementary school by a teenage girl that shocked America and the world.

As children filed into Grover Cleveland Elementary,16-year-old named Brenda Spencer unleashed a hail of gunfire on the school across the street from her home. She killed two adults, including the school’s principal, and injured eight children and a police officer.

Children were holed up in the school before being carefully bused away from the rear playground.

While she was still firing, a San Diego Evening Tribune reporter reached Spencer by telephone. Asked why she was shooting, she calmly explained she had done it because “I don’t like Mondays.”

The horrific incident sparked Bob Geldof, leader of The Boomtown Rats, to write the song: “I Don’t Like Mondays”. It became a huge world-wide hit and sparked the rise of the then-little-known Irish rock group to global star status. The song notably did not make the Top 40 in the United States, banned by many radio stations for the sad memories it unleashed.

Along with her pellet gun, Brenda used the rifle and ammunition her father and brother gave her for Christmas the month prior. The house was not littered with alcohol and she did not sleep in the same bed as her father, as routinely reported.

Brenda is in the California Institute for Women in Corona CA. Her next parole hearing is Sept 2021. 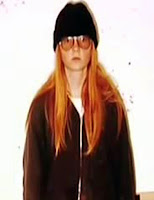