Brenda was a year older than Andy Kygar and knew him from the neighborhood.

On January 29th 1979, as soon as school was over on theday of Brenda's shooting, Andy listened to a neighbor’s police scanner and heard that SWAT was going to go in if Brenda did not surrender soon. Neighbors went around to the best vantage point on the east side of Lake Atlin Ave.

They stood there with a 15-year-old schoolmate and neighbor named Andy Kygar while Patrick took photos. Andy was heard saying, “She (Brenda) should just kill herself after shooting those people.”.

On January 2nd 1982, less than three years later, Kygar shot and killed his ex-girlfriend, Becky Reynolds ,17, in her car and then drove around with her body for more than an hour. Finally, he parked on a residential street in the San Diego suburb of El Cajon and took his own life with the same gun. The family, which gave him no funeral, still lives in the same house behind Brenda Spencer's old house. 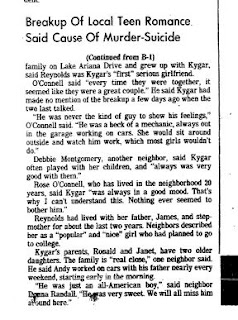