Dorothy Nadine Hobel was born in 1935 to James Laverne and Ruth Nadine in La Mesa (about 10 min from San Carlos). She was the youngest of three and their only daughter.

The Hobel’s left the little town of Leigh in Colfax County, Nebraska and migrated west to get married. As the story goes, they were part of the huge swarm of people moving west at the end of the roaring twenties. They packed up the Hupmobile and travelled to the coast.

Soon James began working at the Rohr Aircraft Cooperation in Chula Vista. His brother, Emil, travelled west with his family to join them.

By the time Dot was 5 they have moved to Normal Heights in San Diego. Her father was a Councilman covering the Downtown to North Park area. He was imprisoned for embezzlement in 1939 and later pardoned. Despite this setback he continued his on his way and became Vice President of Industrial Relations for Rohr.

He then won a tenacious election for the Chula Vista City Council seat and eventually reached the height of Mayor. He served one term in the early fifties, famously suffered a knee injury while tobogganing in March of 1951 - forcing him to make ‘deals’ at his home.

He was embroiled in a scandal relating to planning permissions and Rohr’s financial influence. He was recalled. Soon after his political career ended, he divorced old Ruth and took up with Trudy, who was almost ten years younger. He died at 82 in 1989 and never commented about his granddaughter.

Dot graduated Chula Vista High School and ventured North to Woodbury College in Burbank. She studied Business and rented a small but apartment in an historical building in Sanford, Los Angeles.

She married Wally on December 12th, 1954 at the Community Congregation Church in Chula Vista, California. They travelled down to her parent’s local place of worship, just south of San Diego. They obtained the licence to marry in Los Angeles about two week earlier and returned the completed document two days after the wedding. Wally had just turned 26 and she was only 19 years old.

They had three kids, Scott, Teresa and Brenda and divorced in 1972. The kids went to live with Wally. Dot and Brenda had a strained relationship before and after the shooting.

Dot was a San Diego native and known as popular and out-going. She was the bookkeeper for the Andy Williams Golf Tournament during half of the year and retained full time clients like the Del Mar Fair, University of San Diego and a local church and community bookstores from her home office on Boulder Lake 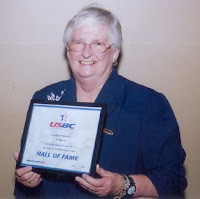