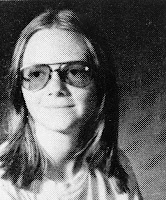 Despite popular belief Brenda had a number of friends growing up in San Carlos, San Diego. A few were interviewed by the police after her arrest and at least one was said to have given statements in the civil suit brought by the victims.

Brenda's father indicated there were a few friends who spent the night at their house and also came with them to their mountain property. Brant Flemming, the next door neighbor is the most notable friend of Brenda's. He was 3 1/2 years younger and was arrested with her in 1975 and 1978 for shoplifting and vandalism.

Susie Stewart was her best friend in Jr High and first year at Patrick Henry. She was with Brenda during her bike accident and head injury in 1975. They drifted apart when Brenda attended another school for a semester and they did not have classes together in 1978. Her family rented a house on Mission Beach each summer and had Brenda as a guest. Susie also visited juvenile hall with Wally Spencer and wrote to Brenda for many years. Curiously, Wally called her 'Susan' instead of her commonly used name when interviewed by police. They believed he was purposely trying to distance himself from her. But why?

Dawn White was thought to be Brenda's good friend by her father. Other friends disputed this despite Wally meeting her many times and knew her by name. She lived quite close to the Spencer's and was known by Brenda's brother and sister. Dawn told the SD Union newspaper that she was one of her best friends and "“I went into the desert with her last year to go target shooting and she killed a lot of lizards and squirrels. She almost never missed.”

Shari Stuchlik was Brenda's best friend in Elementary and Jr High School.She lived down the road and was friendly with the entire family. Susie Stewart was jealous of Shari and tried to keep her away from Brenda once they were in Jr High School. Shari was close to Brenda at the time she moved from her mom's to her dad's after they split up.

Tracy Mills 16, described herself as a friend at high school to the newspapers saying, “She always talked about getting wasted on drugs, and about shoplifting all the time. She seemed proud of the fact that she was a good shoplifter."  Tracy also said, “She always seemed like a radical,” a statement that has been incorrectly attributed to a youth councilor. Wally said she was the last girl to visit Brenda at home.

Roderick Brant Flemming was Brenda's next door neighbor and lived with his sister and mother. His former step-father was a police office but had left the home tow years before the shooting. The Flemmings had a swimming pool and many of the neighbor kids came over to swim on hot summer days. Brenda was one of the many kids there.
Brant and Brenda struck up an unusual friendship. She was over three years older but they were similar in small stature and spent a lot of time together. They vandalized Cleveland Elementary the year before she shot from her front door. They were also arrested stealing gun ammunition at local drug store years before.
His life was changed forever by Brenda when she showed him drugs in the fort she built in the garage. His family moved away to Santee the summer of 1978 but they stayed in touch. Brant rode his bike more than a hour to visit the weekend before the shooting. They spent that Saturday harassing the witnesses who saw them vandalize the school.
After Brenda was arrested, Brant was questioned by the police but no further action was taken against him. He was clearly Brenda's follower but probably her best friend.Brant briefly joined the Speech Team in high school but eventually battled drugs and dropped out. He sadly died in a single vehicle car crash in 1993. Brant was so little when he met Brenda.
By N Leigh Hunt at February 25, 2020 No comments:

The House on Lake Atlin Ave

Directly across the street from Cleveland Elementary was 6356 Lake Atlin Ave. It was a normal family home painted light brown with white trim. The one story, three-bedroom house with a two-car garage and ample off-street parking, was built in 1959, about the same time as the school.

The house was owned by single father Wallace “Wally” Spencer, who had been divorced about eight years. He lived her with Brenda, his youngest, a junior at Patrick Henry High School, the other her older brother Scott.

“Entrance way was slightly wider than it was deep and was a beige color tile,” said Det. Thwing. Just outside of the entryway were the white folding knife and hunting knife sitting next to a small bottle of Southern Comfort.

To detectives, the folding knife looked to be for filleting or gutting fish and the hunting knife was dark with a brown leather handle. The pint-sized bottle was listed as a quarter full without its cap. There were no indications the alcohol spilled as the floor was dry and clean. Thwing said saw no drug remnants or paraphernalia anywhere in the house.

In the hallway was a rotary telephone with a cord long enough that it could have been transported anywhere throughout the house. Detectives saw no second phone and concluded this must have been the phone Brenda used to communicate with reporters and police.

The first bedroom was Brenda’s. It was untidy and cluttered with a few magazines and clothes. A single bed was against the wall with sage-colored shag carpet. On the bed was a brown and white imitation leather gun case that detectives took into evidence. Next to the bed was a night table covered with random electronics and a small lamp.

On top of the chest of drawers was small stereo with a couple speakers. “It looked like a tape player in the room, which could have possibly been an 8-track player.” said Thwing. He also thought that it may have also been TV parts. Brenda’s room had no posters or pictures and only an old clock hung on the front wall. The police photographed this room at 3:25 pm and moved on.

Brother Scott’s bedroom was in just as much disorder as his sister’s. He had bunk beds and camping gear scattered around.  Bedroom three was clearly a storage area. It was full of red camping coolers and camping gear like sleeping bags. In the far corner was the C02 air rifle Wally had described. Police listed this room as a bedroom in disarray, although that could have described the entire home.

Wally’s room was much the same as the others with, clothes, food bowls, soda cans and papers on the floor. A large mattress and box spring directly on the floor sat in the corner. The table across from the unmade bed was built out of cinder blocks and wooden board. On the table was stacks of magazines and a TV in pieces.

The police report made no mention of the fort or the C02 pistols that Wally said were in his room. This space was not extensively searched, and detectives photographed it and moved on. Thwing described this room as “less cluttered than the other rooms” although pictures disagree with that assessment.

The official police report called this area extremely messy and cluttered with various foodstuffs.  The dining table was covered in pre-packaged snacks and various bottles.

The living room, just off from the kitchen, was covered in unvacuumed light brown shag carpet. Police reports listed it as having a large double lounger and two small couches but not much else. The report also describes a homemade TV set as being the only thing out of the ordinary.

Detectives never opened the sliding glass door or went into the backyard. The SWAT teams and Astrea helicopter surveillance was present for the past six hours, so this may have played a role in that. Though Brenda had spoken of pets, the officers saw saw no sign of any animals while they were in the house.

The official report was not time stamped and it is unknown exactly how long the detectives searched the house. We know the detectives arrived just after the surrender at 3:06 p.m., and the search was over in about two hours. Detective left just before it got dark, when the sun set at 5:18 p.m., and pulled the police tape from around the scene.